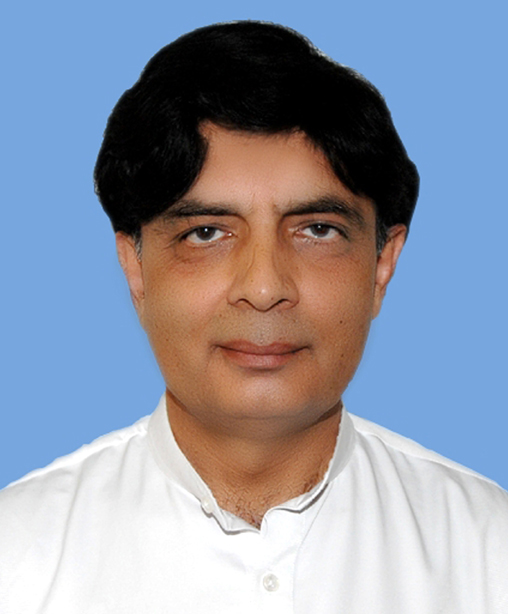 Ch Nisar Ali Khan son of Brig. (Retd) Ch Fateh Khan was born on July 31, 1954 at Chakri Vakilan, District Rawalpindi. He obtained his early education from Aitchison College, Lahore and went to Army Burn Hall College, Abbottabad for higher studies. He started his political career in 1980s after becoming Chairman, District Council Rawalpindi. He was first elected as Member, National Assembly in 1985 and remained as such for eight consecutive terms during 1985-2018. During these terms of Membership of National Assembly, he served in various cabinet portfolios. He functioned as Parliamentary Secretary for Finance & Economic Affairs and Planning & Development during 1985-88; as Minister for Science & Technology in 1988 for a brief period of six months; as Minister for Petroleum & Natural Resources and Minister for Provincial Coordination for two terms during 1990-93 and 1997-99; as Minister for Communications, Livestock, Agriculture & Animal Husbandry and  Food Security & Research in 2008 for short period of two months; as Leader of the Opposition in the National Assembly during 2008-13; and as Minister for Interior & Narcotics Control during 2013-17. In October 2011 he became the first-ever Chairman of Public Accounts Committee of the National Assembly but he resigned as such in November 2011. He is a veteran politician, who has been elected as Member, Provincial Assembly of the Punjab in General Elections 2018. He took oath as Member Punjab Assembly on 26 May, 2021 after lapse of two years and ten months.