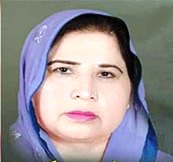 Ms Tallat Mehmood widow of Mr Shaukat Manzoor Cheema was born on July 1, 1963 at Wazirabad. She obtained the degree of M.A. (Political Science) in 1987 from University of the Punjab, Lahore; and B.Ed in 1989 from Education College, Lahore. An agriculturist, who has been elected as Member, Provincial Assembly of the Punjab in bye-election held on February 19, 2021 against the seat fell vacant due to the death of her husband, who served as Member, Punjab Assembly during 2008-2020 consecutively; and functioned as Chairman, Standing Committee on Social Welfare & Bait-ul-Maal during 2013-18. He also served as Tehsil Nazim, Wazirabad during 2001-05.