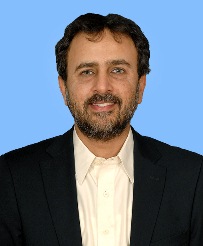 Sardar Awais Ahmad Khan Leghari son of Mr Farooq Ahmad Khan Leghari was  born on March 22, 1971 in Lahore. He obtained the degree of B.A in 1994 from University of Rochester, New York, USA. An agriculturist, who remained Member Punjab Assembly during 1997-99; as Member National Assembly during 2002-07, 2011-13 and 2013-18. He functioned as Minister for Information Technology and Telecommunications during 2002-04; and as Federal Minister for Power Division during 2017-18. He has returned to Punjab Assembly in bye-elections held on October 14, 2018 against the seat vacated by Sardar Muhammad Khan Leghari, who had won both National and Provincial seats and opted for NA seat. His father, Mr Farooq Ahmad Khan Leghari  was a seasoned parliamentarian, who had rich political wisdom and acumen and served as President of Pakistan during 1993-97. He remained Member Punjab Assembly during 1988 and functioned as Leader of the Opposition. He served as Member National Assembly for five terms during 1977, 1989-90, 1990-93, 2002-07 and 2008-10. His brother Sardar Muhammad Jamal Khan Leghari a former Senator served as Member of Provincial Assembly of the Punjab during 2013-18.