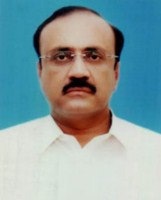 Mr Ahmad Khan Bhacher son of Malik Jahaan Khan Bhacher was born on April 19, 1968 at Mianwali. He graduated in 1989 from University of the Punjab, Lahore. An agriculturist and a businessman, who remained Member Punjab Assembly during 2013-18 and has been re-elected as Member, Provincial Assembly of the Punjab for the second consecutive term in bye-elections held on October 14, 2018 and is functioning as Parliamentary Secretary for Local Government & Community Development. The General Elections of July 2018 could not be held in his constituency due to the death of one of the candidates.