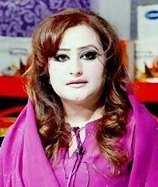 Syeda Uzma Qadri wife of Syed Zaeem Hussain Qadri was born on March 23, 1970. She served as Member Punjab Assembly during 2013-18 and has returned to this Assembly for the second consecutive term in General Elections 2018 against one of the seats reserved for women. She was Member of a group working on climate change and worked with French Ambassador for Cop 21 Conference. She has also worked for restoration of culture of Punjab. Her husband served as Member, Punjab Assembly during 2008-13 and 2013-18; functioned as Special Assistant to Chief Minister for Higher Education & Youth Affairs during 2008-13; and as Minister for Auqaf & Religious Affairs during 2016-18.