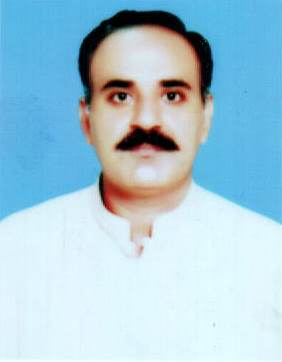 Sardar Muhammad Awais Dreshak son of Sardar Ghulam Mujtaba Dreshak was born on December 18, 1972 at Rajanpur. After completing Intermediate in 1991 from Aitchison College, Lahore, he graduated in 1993 from Government College University, Lahore. He obtained the degree of M.Sc. (International Relations) in 1996 from Quaid-e-Azam University, Islamabad. An agriculturist, who has been elected as Member, Punjab Assembly uncontested in terms of Section 75 of the Elections Act, 2017 (XXXIII of 2017), and took oath on October 4, 2018. Because the returned candidate in the said constituency died immediately after General Elections held on July 25, 2018. He worked with United Nations for more than a decade in various fileds like Governance, Health, Education and Advocacy. He belongs to a family of well-known and seasoned politicians, who have roots in political arena of Pakistan even before partition. His grandfather, Sardar Allan Khan Dreshak was Member of Punjab Legislative Council during 1921-23; and another grandfather, Sardar Bahadur Khan Dreshak remained Member of Punjab Legislative Council during 1930-36; Member of Punjab Legislative Assembly during 1946-47, 1951-55; Member of West Punjab Legislative Assembly during 1947-49; and Member of Provincial Assembly of West Pakistan during 1956-58. His father was Member of Punjab Assembly during 1990-93; and served as Chairman, District Council Rajanpur during 1983-87. His uncle, Sardar Nasrullah Khan Dreshak served as Member, Punjab Assembly for six terms during 1972-93, 2013-18 and functioned as Minister for Irrigation & Power, Law & Parliamentary Affairs and Planning & Development. He was also a Member of National Assembly during 1997-99, 2002-07 and is a sitting MNA. His uncles, Sardar Ramzan Khan Dreshak and Sardar Karam Elahi Khan Dreshak were Members of Provincial Assembly of West Pakistan during 1962-65 and 1965-69 respectively. His cousin, Dr Hafeez Ur Rehman Khan Dreshak was MNA during 2013-18; and another cousin, Sardar Amanullah Khan Dreshak served as Member, Punjab Assembly for four consecutive terms during 1993-13 and functioned as Advisor to CM during 1995-96. His three cousins namely Sardar Hasnain Bahadar Dreshak (Minister for Livestock & Dairy Development), Sardar Ahmad Ali Khan Dreshak and Sardar Farooq Amanullah Dreshak are sitting MPAs. His cousin, Sardar Ali Razza Khan Dreshak was Member of Punjab Assembly during 2013-18 and remained District Nazim Rajanupr during 2005-08; and another cousin, Sardar Khalil ur Rehman Dreshak served as Tehsil Nazim for two consecutive terms during 2001-08.