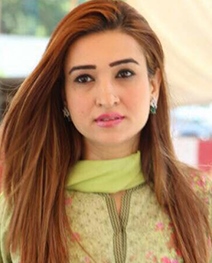 Ms Bushra Anjum Butt daughter of Mr Anjum Butt was born on July 17, 1981 in Lahore. She graduated in 2007 and obtained the degree of M.A (English) in 2009 from Kinnaird College for Women, Lahore. A professor, who remained Member, Provincial Assembly of the Punjab during 2013-18 and has returned to Punjab Assembly for the second consecutive term in General Elections 2018 against one of the seats reserved for women. She was a teacher at Advanced Resource Centre during 2007-08 and Professor at Beaconhouse National University during 2009-10. She served as a Teaching Fellow at Lahore University of Management Sciences (LUMS) during 2011-14.  She has travelled to China, Jordan, USA, London and Turkey.