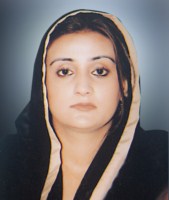 Ms Azma Zahid Bokhari wife of Mr Sami Ullah Khan was born on August 18, 1976 at Faisalabad. She obtained the degree of LL.B. in 2000 from Pakistan Law College, Lahore. A practicing lawyer, who served as Member, Provincial Assembly of the Punjab during 2002-07, 2008-13 and 2013-18; functioned as Parliamentary Secretary for Culture & Youth Affairs during 2009-11; as Chairperson, Standing Committee on Law & Parliamentary Affairs during 2014-17; and as Parliamentary Secretary for Information & Culture during 2017-18. She has returned to this Assembly for the fourth consecutive term in General Elections 2018 against one of the seats reserved for women. She has travelled to UK, USA, Dubai, India, Holland, Spain, Qatar and China. She visited USA in 2011 as a Member of delegation of Indo-Pakistan Young Parliamentarians; Spain to attend Socialist International Conference; and India to attend “SAFMA” Conference. Her husband remained Member Punjab Assembly during 2002-07 and is a sitting MPA from PP-144.