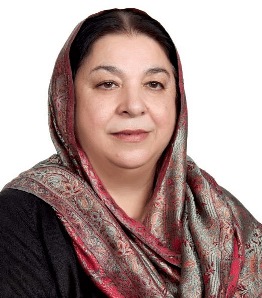 Dr Yasmin Raashid wife of Mr Rashed Nabi Malik was born on September 21, 1950 in Lahore. She obtained the degrees of MBBS in 1978 from Fatima Jinnah Medical College, Lahore; MCPS in 1981 and FCPS in 2010 from College of Physician & Surgeons Pakistan. She enrolled in the Royal College of Obstetrics & Gynecology London UK, from where she obtained MRCOG degree in 1984 and FRCOG degree in 1999. A Doctor, who has been elected as Member, Provincial Assembly of the Punjab in General Elections 2018 against one of the seats reserved for women and is functioning as Minister for Primary & Secondary Healthcare and Specialized Healthcare & Medical Education. She served as Professor of Obstetrics & Gynecology, Rawalpindi Medical College, Rawalpindi during 1996-99 and Fatima Jinnah Medical College, Lahore during 1999-2003. She has also served as the Head of the Obstetrics & Gynaecology Department, King Edward Medical University, Lahore during 2003-10. She served as Professor and Head of the Obstetrics & Gynaecology Department; Head of Fetal Medicine Unit; and Head of Fistula Repair Unit, Central Park Medical College, Lahore. She has the honour to head different projects on Health & Education specifically in Punjab as well as in Pakistan including Punjab Safe Motherhood Initiative Project, Punjab Thalassaemia Prevention Project, Young Champion Project for Girls Education in Lahore, Social Mobilization on Maternal & Child Health through Community Action Process, Advocacy and Social Mobilization for Women’s Health, Establishment of Temporary Learning Centres in District Muzaffargarh and Global Health Workforce Alliance & WHO Project on Supporting Human Resources Development in Medical Schools in Pakistan. She has been serving as Advisor, Punjab Thalassaemia Prevention Programme; as Patron, Alzheimer’s Pakistan and is elected Member of Alzheimer’s Disease International. She functioned as President, Jahandad Society for Community Development; as Chairperson, Taskforce for Women Development, Government of the Punjab; and as Chairperson Comm. for Women Health, Social Welfare Department Punjab. She remained an office bearer of PMA during 1988-2010. She has 51 research publications to her credit. She had keen interest in sports and was ranked Pakistan No.2 in Table Tennis, remained University Blue in Lawn Tennis and served as Captain Punjab University Basket Ball Team. She has extensively travelled abroad. Her father in Law, Mr Ghulam Nabi Malik was Member of Punjab Legislative Assembly during 1951-55 and Member of Provincial Assembly of the Punjab during 1972-77 and 1977; he also functioned as Minister for Education, Punjab during 1975.