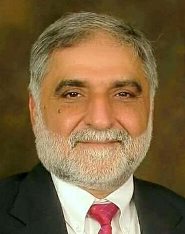 Mr Muhammad Mohsin Khan Leghari son of Lt. Col. (Retd.) Rafiq Ahmed Khan Leghari was born on June 9, 1963 at Dera Ghazi Khan. After initial schooling at Aitchison College Lahore, he attended the University of Oklahoma. He obtained Certification in Global Financial Markets from the Securities Institute of Australia and also has a Post Graduate Diploma in Applied Economics from University of the Punjab, Lahore. He worked with the world’s leading multinational Financial Information and Information Technology Companies before being elected for the first time to the Provincial Assembly of the Punjab in 2002 and then again in 2008. During his tenure in the Provincial Parliament, he was the Chairman of the Standing Committee on Local Government & Rural Development during 2003-07; and Member of Public Accounts Committee during 2008-12. In 2012, he was elected as the first ever Independent Senator from Punjab and retained his independent status throughout the term during 2012-18. In the Senate he served Committees on Finance, Functional Committee on Human Rights, Food and National Security, Planning & Development, Delegated Legislation, Water & Power, Defence and the Communications. He is an alumni of National Defence University, Islamabad and the International Academy for Leadership (IAF) at Theodor Heuss Academy in Gummersbach, Germany. He has been elected to the Punjab Assembly for the third term in General Elections 2018 and is functioning as Minister for Irrigation. He has widely travelled and has represented Pakistan at the Annual United Nations hearings of the Inter Parliamentary Union, 7th World Water Forum in Korea and COP 22, United Nations Climate Change Conference Marrakech, Morocco. He belongs to a renowned political family of Punjab, which has representation in the Parliaments even before partition. His father was a Member of Punjab Assembly during 1993-96 and 1997-99.