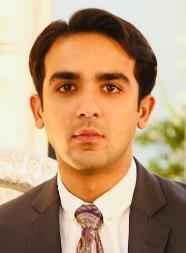 Makhdoom Syed Usman Mehmood son of Makhdoom Syed Ali Akbar Mehmood was born on September 6, 1990 in Lahore. He obtained the degree of M.A (Economics & Property Development). An agriculturist, who has been elected as Member, Provincial Assembly of the Punjab in General Elections 2018. His father remained Member, Provincial Assembly of the Punjab for five terms during 1988-90, 1990-93, 1993-96, 1997-99 and 2013-18; served as Advisor to Chief Minister during 1991-92. He hails from a family of renowned, seasoned and acclaimed politicians. His uncle, Makhdoom Syed Ahmed Mehmood was Member of Punjab Assembly during 1986-88, 1988-90 and 2008-2012; functioned as Minister for Excise & Taxation during 1988-90 and as Governor of the Punjab during 2012-13. He served as MNA during 1990-93, 1993-96, 1997-99 and also functioned as Minister of State for Environment, Local Government & Rural Development during 1997-99. His cousin, Makhdoom Syed Murtaza Mehmood remained Member Punjab Assembly during 2012-13, 2013-18 and is a sitting MNA; his another cousin Makhdoom Syed Mustafa Mehmood served as Member National Assembly during 2008-13, 2013-18 and is also a sitting MNA. His great-grandfather, (late) Makhdoom Ul Mulk Syed Ghulam Miran Shah was an eminent personality of former Bahawalpur State who actively participated in Pakistan Movement before partition and was appointed as Minister for Refugees and Rehabilitation by the Amir of Bahawalpur and was awarded the title of “Makhdoom Ul Mulk” in recognition of his meritorious services. His grandfather Makhdoomzada Syed Hassan Mehmood served as Chief Minister of Bahawalpur State as well as Minister for Education and Health; as Member of Constituent Assembly of Pakistan during 1951; as Member, Provincial Assembly of West Pakistan during 1956-58 (Minister for Information, Social Welfare, Local Government & Information); as Member Punjab Assembly during 1972-77, 1985-88 and functioned as leader of the opposition during 1986,. His uncle, Syed Yousuf Raza Gillani functioned as Speaker National Assembly and Prime Minister of Pakistan.