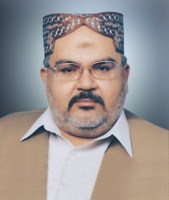 Makhdoom Syed Iftikhar Hassan Gillani son of Makhdoom ul Mulk Syed Shams Ud Din Gillani was born on December 23, 1958 at Uch Sharif, District Bahawalpur. He graduated from SE College, Bahawalpur in 1979. He is the Chief of Gillani family and is the Sajada Nasheen of Darbar-e-Qadria, Uch Sharif. An agriculturist, who served as Councillor, Tehsil Council, Uch Sharif; as Member, District Council Bahawalpur during 1990-93; as Member, Bahawalpur Development Authority during
1992-93; as Chairman, Steering Committee District Bahawalpur during 2002-07; and as Chairman, Allotment Committee District Bahawalpur during 2005-07. He remained a Member of Punjab Assembly during 1997-99, 2002-07, 2008-13, 2013-18 and served as Chairman, Standing Committee on S&GAD during 1997-99 & 2008-13; and as Advisor to Chief Minister during 2002-07. He has been re-elected as Member of Punjab Assembly for the fifth consecutive term in General Elections 2018 and is functioning as Parliamentary Secretary for Management & Professional Development Department. He has travelled to USA, UK, Canada, Germany, Holland, UAE, and Saudi Arabia. His father, remained Member of Bahawalpur Assembly till 1956 when the state of Bahawalpur was incorporated into a single Province namely Province of West Pakistan. Later, he became Member of Provincial Assembly of West Pakistan and served as such for two consecutive terms during 1962-69 and 1977. His maternal grandfather, Mian Muhammad Ibrahim Ali Berq remained Member, Punjab Legislative Assembly/Minister for Education during 1946-47; as Member, West Punjab Legislative Assembly during 1947-49; as Member, Provincial Assembly of West Pakistan during 1962-65; and as Member, National Assembly during 1972-77 and 1977; his nephew, Syed Ali Hassan Gillani, served as Member, National Assembly during 2002-07 and 2013-18; and his another nephew Mr Sami Hassan Gillani is a sitting MNA.