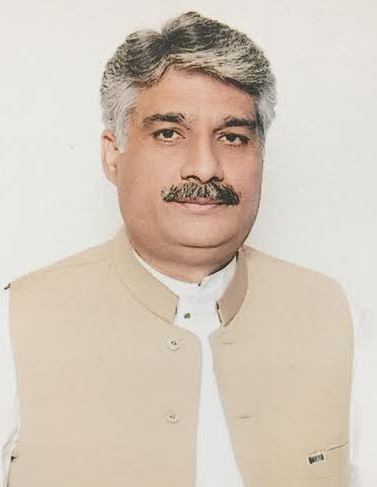 Mian Muhammad Shoaib Awaisi son of Mian Shahab-ud-Din Awaisi was born on August 6, 1971 at Bahawalpur and is an intermediate. He started his political career as a Chairman, Market Committee Bahawalpur in 1996 and served as a Member, District Council Bahawalpur during 1998-99. He was elected as Nazim, Union Council No.29 Khanqua Sharif in 2001 and served as such till 2005. He served as Tehsil Nazim Sadar Bahawalpur during 2005-09; and as Administrator, Market Committee Bahawalpur during 2003-05. He remained Member Provincial Assembly of the Punjab during 2013-18 and functioned as Chairman Parks & Horticulture Authority Bahawalpur during 2014-18. A landlord and a businessman, who has been elected as Member Provincial Assembly of the Punjab for the second consecutive term in General Elections 2018. He has travelled to Saudi Arabia, Malaysia, UAE, Thailand and Singapore. He is a descendant of a well-known Saint of Sub-continent, Hazrat Khawaja Mohkum Din Serani and hails from a well-known political family of Bahawalpur. His grandfather, Mian Muhammad Qasim Awaisi served as Member, Provincial Assembly of West Pakistan during 1956-58; his father, Mian Shahab-ud-Din Awaisi, remained Member Punjab Assembly for four consecutive terms during 1985-88, 1988-90, 1990-93, 1993-96 and functioned as Parliamentary Secretary for Housing, Physical & Environmental Planning, Planning & Development and Auqaf. His maternal uncle Mian Sardar Ahmad Awaisi was Member of Punjab Assembly during 1972-77 and 1977; his paternal uncle, Mian Najeeb-ud-Din Awaisi served as Member, Punjab Assembly during 1997-99; as Tehsil Nazim, Bahawalpur during 2000-04; as Member National Assembly during 2013-18 and is a sitting MNA. His another paternal uncle, Mian Saif-Ullah-Awaisi was Member of Punjab Assembly during 2002-07.