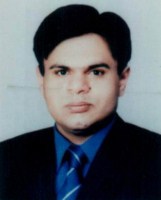 Mian Irfan Aqueel Daultana son of Mian Shaukat Ali Aqueel was born on March 29, 1976 in Lahore. After initial schooling at Aitchison College, Lahore; he graduated in Economics in 1995 from LACAS, Lahore and obtained the degree of B.Sc in 1996 from University of the Punjab; then he post-graduated in Business Administration in 2001 from Canadian University Lahore Campus and Diploma in Architecture from University of Cambridge, UK. A businessman, who remained Member, Provincial Assembly of the Punjab during 2013-18 and has been re-elected as Member, Punjab Assembly for the second consecutive term in General Elections 2018. He remained Member Public Accounts Committee-II during 2013-18; and General Secretary, Young Caucus Punjab during 2014-16. He has travelled to USA, UK and Saudi Arabia. He belongs to a distinguished political family. His mother, Mrs Tehmina Daultana was Member of National Assembly for five consecutive terms during 1993-2018. She functioned as Minister for Women Development, Social Welfare & Special Education during 1997-99; as Minister for Science & Technology during 2008; and as Chairperson, Parliamentary Committee on Appointment of the Chairperson of the National Commission on the Status of Women during 2013-18; his grandfather, Mr Riaz Daultana remained MNA during 1972-77 and 1985-88; his another grandfather, Mian Mumtaz Muhammad Daultana was Chief Minister of Punjab during 1951-53; and Member, Provincial Assembly of West Pakistan during 1956-58; and his uncle, Mr Javed Mumtaz Daultana was Member of Punjab Assembly during 1977, 1988-90 and 1993-96; and his another cousin, Mr Azeem Daultana was Member of National Assembly during 2008-13.