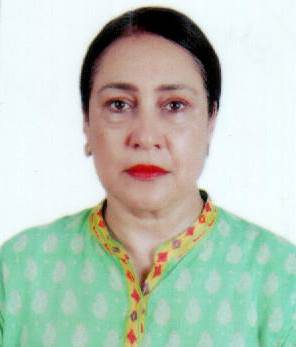 Syeda Maimanat Mohsin wife of Mr Najam Aziz Sethi was born on September 19, 1958 in Lahore. She obtained her higher education from Cambridge University, UK and graduated in 1980 and Post-graduated in 1984 from there. Being a journalist, she has been working as a Publisher & an Editor of magazines namely "The Friday Times" & "Good Times" since 1989 and has also been anchoring/hosting different programmes at various TV Channels. She is also a social worker and is running two Trusts in Okara. She has been elected as Member, Provincial Assembly of the Punjab in General Elections 2018. She has extensively travelled abroad. She belongs to a renowned political family and her many relatives are seasoned politicians/parliamentarians. Her uncle, Syed Sajjad Haider remained Member National Assembly during 1985-88, 1988-90, 1990-93, 1997-99; Member Punjab Assembly during 1993-96 and Zila Chairman. Her cousin, Syeda Abida Hussain remained Member, Provincial Assembly of the Punjab during 1972-77 and Member National Assembly during 1985-88, 1988-90, 1997-99 for three terms and also functioned as Minister of Food and Agriculture Population Control during 1997-99 and as Ambassador to USA during 1991-93. Her another cousin, Syed Fakhar Imam a sitting MNA, remained Member National Assembly during 1985-88, 1990-93; functioned as Speaker of National Assembly during 1985-86; her niece, Ms Syeda Sughra Imam served as Member Punjab Assembly during 2002-07 and functioned as Minister for Social Welfare during 2003-04 and as Senator during 2009-15. Her another cousin, Syed Iftikhar Bokhari remained Senator during 1988-1991.