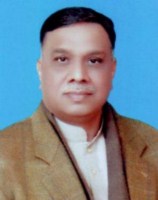 Bao Akhtar Ali son of Ch Rehmat Ali was born on January 1, 1953 in Lahore. He served as Councillor, MCL during 1998-99; and as District Member, Zakat & Ushr during 1988-93. He remained Member, Provincial Assembly of the Punjab during 2013-18 and functioned as Chairman, Standing Committee on Services & General Administration Department. He has been re-elected as Member Punjab Assembly for the second consecutive term in General Elections 2018. He has visited Saudi Arabia and USA.