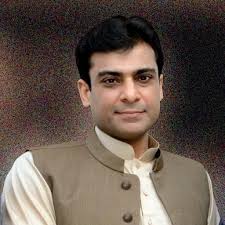 Mr Muhammad Hamza Shahbaz Sharif son of Mian Muhammad Shahbaz Sharif was born on September 6, 1974 in Lahore. He graduated from Government College, Lahore and obtained the degree of LL.B from London School of Economics. He remained Member National Assembly for two consecutive terms during 2008-13 and 2013-18. A businessman, who has been elected as Member, Provincial Assembly of the Punjab in General Elections 2018 and is functioning as Leader of the Opposition. In his relatively young political career, he has led and steered reforms process in strategic vital areas like sports and youth affairs; criminal justice system; commercialization and urban planning of mega cities; local bodies setup; environment and wildlife; preservation and conservation of heritage etc; and ensuring provisions of civic rights and facilities to the citizens. He also spearheaded important projects of setting up new educational and health institutes in his constituency. He was the Chairman of Sports Board Punjab, which successively conducted the world’s largest sporting events. He is a committed public representative who extensively interacts with all segments of the society and believes in participatory decision making and furthering democratic values. He has special interest in nature and wildlife and often travels to scenic and hilly areas. He likes reading political biographies.