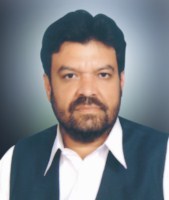 Pir Muhammad Ashraf Rasool son of Syed Ghulam Rasool was born on April 7, 1965 in Lahore. He obtained the degree of MBA in 1988 from Sydney, Australia. He served as Nazim, Union Council No.27 Ferozewala during 2000-01 and functioned as Leader of the Opposition. He was Member, Provincial Assembly of the Punjab during 2008-13, 2013-18 and served as Parliamentary Secretary for Forestry, Fisheries & Wildlife during 2008-13. He has returned to the Punjab Assembly for the third consecutive term in General Elections 2018.