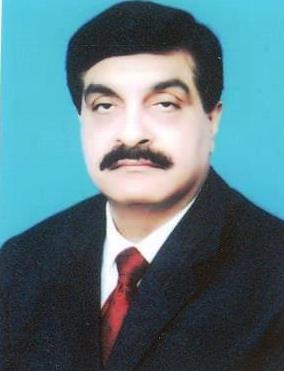 Lt Col (R) Sardar Muhammad Ayub Khan son of Sardar Muhammad Murad Khan was born on March 14, 1961 at Toba Tek Singh. After obtaining initial education from Government College University, Lahore, he was commissioned in Pakistan Army and graduated from Pakistan Military Academy, Kakul in 1980. He also obtained the degree of LL.B. in 2005 from Punjab Law College, Lahore. He retired from the Army as Lieutenant Colonel in 2002. A practicing lawyer and an agriculturist, who remained Member, Provincial Assembly of the Punjab during 2008-13 and functioned as Parliamentary Secretary for Environment and S&GAD. He was again elected in 2013 and functioned as Minister for Counter Terrorism during 2017-18. He has returned to Punjab Assembly for the third consecutive term in General Elections 2018. He officially visited China in 2016. His father, served as Member of Punjab Assembly for four consecutive terms during 1985-88 (also functioned as Parliamentary Secretary for Communication & Works), 1988-90 (also remained Special Assistant to Chief Minister), 1990-93 (Advisor to Chief Minister) and 1993-95; and his brother, Sardar Muhammad Masood Khan remained Member, Punjab Assembly during 1995-96, 1997-99 (also functioned as Parliamentary Secretary for Auqaf, Zakat & Ushr).