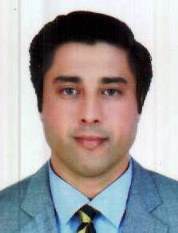 Mr Jahangir Khanzada son of Col (Retd) Shuja Khanzada was born on July 8, 1977 at Peshawar. He obtained the degree of M.B.A. (Marketing) in 2000 from Preston University, Islamabad. Being a graduate in Business Administration, he has experience of serving in various Banks. He has visited UK and Dubai. A politician, who has been elected as Member, Provincial Assembly of the Punjab in bye-elections held on October 6, 2015 against the seat fell vacant due to the assassination of his father Col (Retd) Shuja Khanzada in a suicide attack occurred on 16 August, 2015 in his ancestral home village Shadi Khan and is serving as Minister for Youth Affairs & Sports. His father came of Yousafzai clan of Pathans, remained commissioned in Pakistan Army, participated actively in 1971 Indo-Pak War and was also awarded gallantry award “Tamgha-e-Basalat” in 1988. Being an experienced officer, he was posted as Military Attache to the Embassy of Pakistan in Washington DC, USA during 1992-94; later, he was seconded to the Embassy of Pakistan, as Minister Information. After joining politics, he successfully served as Member, Punjab Assembly during 2002-07, 2008-13 and 2013-15 and functioned as Special Assistant to Chief Minister, Punjab, Minister for CMIT & I&C during 2002-07, Chairman, Chief Minister’s Task Forces on Agriculture and Police Training Reforms during 2008-13 and Minister for Environment Protection from June 10, 2013 with additional charge of Minister for Home from October 14, 2014 till his assassination on August 16, 2015. Mr Jahangir Khanzada’s great grandfather, Capt Ajab Khan also served as Member, Indian Legislative Assembly during 1926.