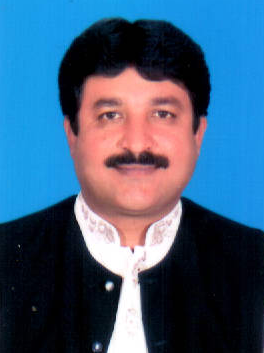 Mr Qaiser Abbas Khan son of Mr Lall Hussain Khan was born on May 15, 1965 at Nawan Kot, Tehsil Chuobara, Layyah. He graduated from Bahauddin Zakariya University, Multan. By profession he is an agriculturist, who served twice as Tehsil Nazim, Choubara during 2001-07. He remained Member, Provincial Assembly of the Punjab during 2008-13, 2013-18 and functioned as Chairman, Standing Committee on Home Affairs during 2009-12; as Parliamentary Secretary for Revenue during 2012-13; and as Chairman, Standing Committee on Transport during 2013-18. He has been elected as Member, Provincial Assembly of the Punjab in bye-elections held on July 17, 2022 against the seat vacated by Lala Muhammad Tahir Randhawa, who was de-notified on 23 May, 2022 by the Election Commission of Pakistan in terms of Article 63A(1)(b)(i) of the Constitution of Islamic Republic of Pakistan, 1973. He made an oath as a Member Punjab Assembly on 21 July 2022. He has travelled to Saudi Arabia, Syria, Iraq, Iran, Dubai and Qatar.