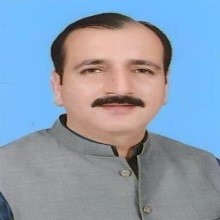 Syed Muhammad Sibtain Raza son of Syed Afzaal Mustafa was born on April 28, 1973 and is Naqvi-ul-Bukhari. He is a law graduate. An agriculturist, who served as Nazim, Union Council Sabaiwala during 2000-04 and as Member Punjab Assembly during 2013-18. He returned to Punjab Assembly for the second consecutive term in General Elections 2018 and functioned as Parliamentary Secretary for Higher Education. He has been re-elected as Member, Provincial Assembly of the Punjab in bye-elections held on July 17, 2022 against the seat vacated by him on being de-notified on 23 May, 2022 by the Election Commission of Pakistan in terms of Article 63A(1)(b)(i) of the Constitution of Islamic Republic of Pakistan, 1973. He again made an oath as a Member Punjab Assembly on 21 July 2022. His father remained Chairman, Town Committee Alipur District Muzaffargarh during 1983-87. His great-grandfather, Syed Muhammad Ali was Ambassador of Patiala State. The Prime Ministership of Patiala State remained in the family of Syed Muhammad Sibtain Raza for almost 100 years. His grandfather, Syed Mustafa Haider served as Honorary Magistrate of Alipur for 12 consecutive years; and his maternal grandfather, Syed Muhammad Murtaza Advocate functioned as President, Town Committee Alipur during 1952-55. His maternal uncle, Syed Ajmal Murtaza remained Chairman, Town Committee Alipur during 1987-91; his another maternal uncle, Syed Ghazanfar Murtaza was City Nazim of Alipur, District Muzaffargarh during 2004-08; and Chairman, MC Alipur during 2016-19