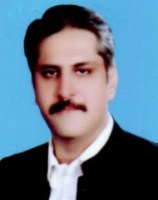 Mr Muhammad Zaheer-ud-Din Khan Alizai son of Mr Muhammad Salahud- Din Khan Alizai was born on September 21, 1973 at Multan and is a Matriculate. An agriculturist, who has been elected as Member, Provincial Assembly of the Punjab for the second consecutive term in general elections 2018. His father-in-law, Hafiz Iqbal Khan Khakwani was Member of Provincial Assembly of Punjab during 1997-99 and also functioned as Minister for Health; his nephew, Mr Sami Ullah Khan, served as Provincial Minister of Khyber Pakhtunkhwa during 2008-13; and his brother-in-law, Maj (Retd) Latifullah Khan was Member of Provincial Assembly of Khyber Pakhtunkhwa during 2008-13.