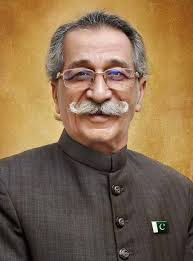 Rana Muhammad Iqbal Khan, son of Rana Phool Muhammad Khan (former MPA and Minister) was born on April 20, 1945 at Gumthala Garhu, Tehsil Pehowa, District Karnal, . He obtained his early education from D.B. High School, Bhai Pheroo (now Phool Nagar). He graduated from Islamia College, Civil Lines, Lahore in 1968 and obtained the degree of LL.B. from University of the Punjab, Lahore in 1971. He is an advocate and agriculturist. He served as Secretary, Tehsil Bar Associate, Bar Association, Chunian during 1975-76. He started his political career from Markaz Council and served as Chairman Markaz Council and Union Council, Phool Nagar during 1979-83, remained Vice Chairman, Zila Council, Kasur during 1983-87; functioned as Chairman Zila Council Kasur for two consecutive terms during 1987-93. He was first elected unopposed, to the Provincial Assembly of the Punjab in the bye-election in 1993, but before he could make oath as a Member, the Assembly was dissolved in June 1993. He was elected to the Provincial Assembly of the Punjab and served as Member during 1993-96. He returned again to the Provincial Assembly of the Punjab for the third consecutive term in 1997 and served as Provincial Minister and held the portfolios of Livestock & Dairy Development, Forest, Wildlife, Fisheries and Tourism during 1997-99. He returned to the Punjab Assembly for the fourth term and functioned as Speaker from 2008-2013, having been elected unopposed as such. He has returned to the Punjab Assembly for the fifth term and is functioning as Speaker since June 03, 2013. He has visited United Kingdom, Saudi Arabia, India and France. He belongs to a noble family of politicians. His father was elected as Member for six consecutive terms, to Provincial Assembly of West Pakistan during 1965-69, Provincial Assembly of the Punjab during 1972-77, 1977, 1985-88, 1988-90 and 1990-93, and also served as Provincial Minister during 1988-90 and 1990-93. His cousin, Rana Muhammad Hayat Khan remained MNA and Parliamentary Secretary during 1990-2007. His another cousin Rana Muhammad Ishaq Khan is a sitting MNA.