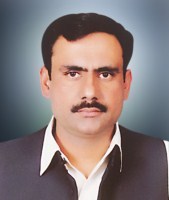 Rana Munawar Hussain alias Rana Munawar Ghous Khan son of Rana Muhammad Ghous Khan was born on April 1, 1972 at Sargodha. He graduated in 1991 from Government College, Sargodha. He served as Tehsil Nazim, Sillanwali during 2001-05. An agriculturist, who served as Member, Provincial Assembly of the Punjab during 2008-13, 2013-18 and has returned to the Punjab Assembly for the third consecutive term in general elections 2018. His father, Rana Muhammad Ghous Khan was famous political leader of Sargodha.